Showcasing “DevDojo,” a Series of Mercari-Developed Learning Content for Engineering

Hello, everyone! My name is @aisaka from the Engineering Office. This post is for day 23 of Mercari Advent Calendar 2022.

In the Mercari Engineering Division, we aim to be an organization where we can all learn from each other, where we can be self-starters, and where we can continuously grow both professionally and personally.

One of the mechanisms that help embody this “learning culture” at Mercari is the “DevDojo” series of in-house technical training programs. We have decided to make some of the DevDojo series externally available to the public for the first time, so in today’s blog, I will introduce DevDojo and its content.

“DevDojo” was named by combining the words "Development" and "Dojo," which means “a place for immersive learning” in Japanese.

The DevDojo series consists of around fourty sessions at Mercari and Merpay, all of which are planned and created by Mercari engineers.
*Merpay is a mobile payment service that can be used through the marketplace app Mercari.

Initially, DevDojo was created for new graduate training, but there was so much interest in the content that many people already in the company asked to participate as well. We decided to open the course to anyone who wants to take it within Mercari Group.

Here is an article about our new graduate recruiting (only available in Japanese): メルカリの新卒エンジニアは入社後どう過ごす？2022年4月新卒が経験した技術研修のすべて

The DevDojo series consists of a diverse range of content full of insights and ideas from Mercari’s engineers.

Now, we’ve decided to make some content externally available to contribute to the global engineering community and provide learning opportunities to everyone outside of the company.

Of course, we have language support from our translation and interpretation team (GOT) to provide simultaneous interpretation for both languages. All presentations are prepared with English slides, and Japanese slides are optional.

Next, I’ll introduce these six lectures in more detail! We will go over the essentials for understanding experimentation at Mercari, and how to instrument and configure basic experiments and feature flags. We will also briefly review how this affects our development practices. You can learn about ideas and designs for implementing and executing experiments.

This session gives a basic overview of how Microservices and various tools combined with GitOps are used inside Mercari, which powers the developer platform.

This session explains incident management in Mercari and its best practices of it. We share a complete incident journey, including three phases "before, during, and after the incident." We also cover how we conduct incident reviews and improve retrospective qualities throughout the company.

This explains the basic concept of Design Doc for product development and introduces the template that Mercari actually uses now. We will also cover how to write a good design doc and deal with it in Mercari.

In Mercari’s fast-paced development cycle, QA (Quality Assurance) is critical to the success of the application. In this course, you will learn about Mercari’s QA team and what processes, tools, and techniques are used to quickly identify and solve issues.

This is just a small sampling of what DevDojo has to offer. We are planning on opening up more content to the public in the near future, so keep an eye out for the next round!

Last but certainly not least, the continued support of the engineers and EMs (Engineering Managers) on the front lines is an absolute must to open internal content like this to the public.

I’d like to give a big thanks to all the Mercari members who collaborated across teams and contributed to creating, reviewing, and presenting the content. 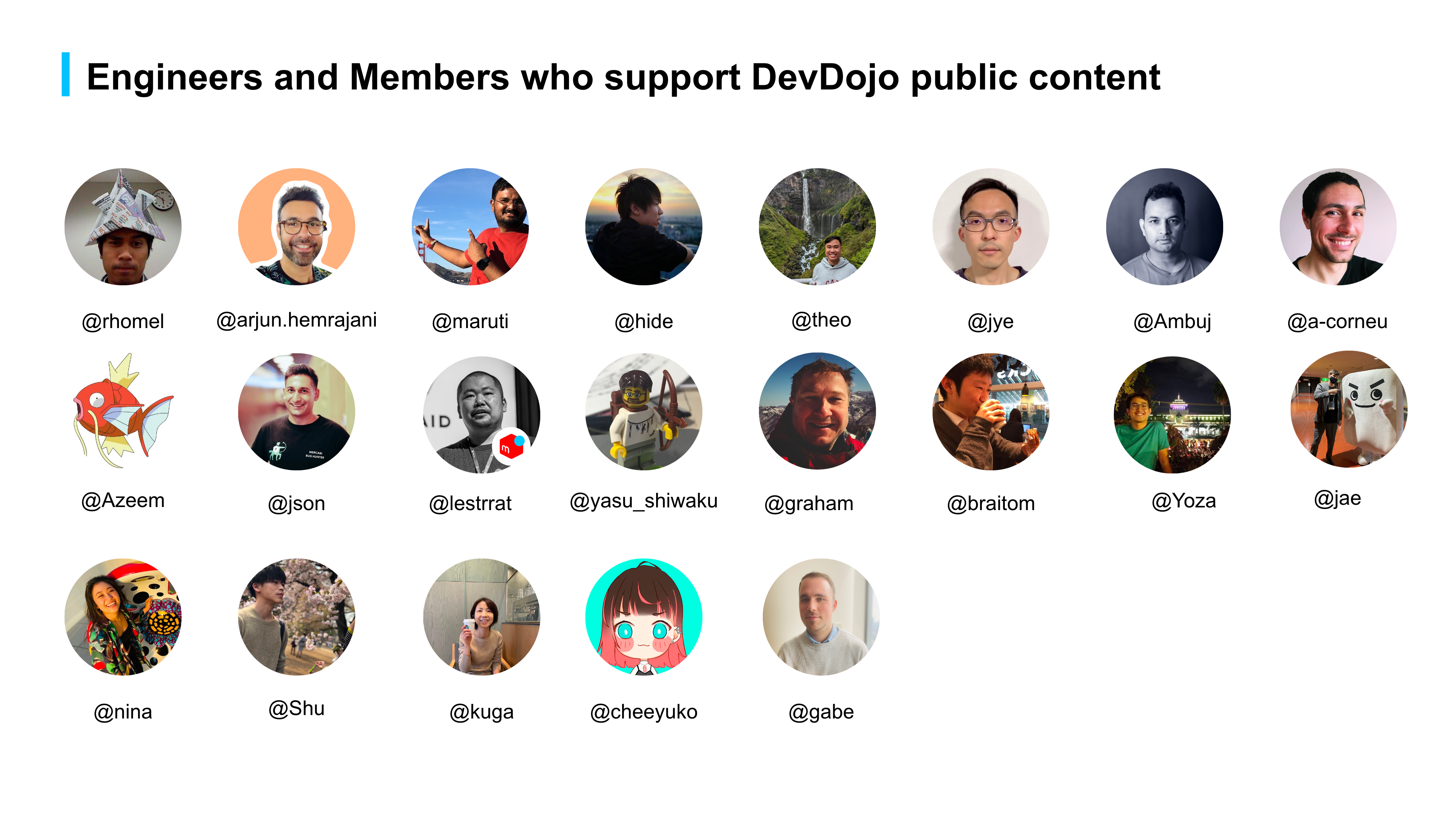 We hope our content helps you learn something new.

Mercari Group is actively hiring engineers right now! If you are at all interested, please do not hesitate to reach out!

Day 24 of the 2022 Mercari Advent Calendar will be written by @prashant, who is an ML engineer. Be sure to check it out!