Securing the SDLC at Mercari: Solutions for Automated Code Scanning This blog is part of the Security Tech Blog Series, written by Shaokang from the Mercari Product Security Team.

In this blog, I will explain our approach to securing the SDLC (Software Development Life Cycle) at Mercari, by introducing the major pain points we face during each phase of the SDLC and providing an overview of code scanning and other tools we have in our arsenal to aid in dealing with these issues.

The SDLC and Pain Points for Security Phases of the SDLC

To begin with, let’s have a quick recap on the basics of each phase of the SDLC as illustrated in the diagram above and as they apply to Mercari.

In this blog our main focus will be on the Development and Testing phases of this lifecycle, but many of the solutions we put forward also support the application for the long-term through the Deployment and Maintenance phases as well.

As we can see from this overview of the SDLC, security is not necessarily an inherent part of most of the phases. This can lead to the following kinds of pain points:

Planning and design: Security is treated as an afterthought, where the focus is generally on functionality and user experience and in some cases security may not be addressed.

Development: Insecure coding may exist in the original code, such as bugs and even vulnerabilities. Apart from that, insecure inclusion may happen due to:

Testing: It is very likely that the following scenarios may happen. The first is the lack of resources for security testing. Depending on the scope and schedule for release, we may only be able to do blackbox testing without in-depth analysis of the source code, or we may not have time for extra rounds of testing after a feature update or even a QA bug-fixing pull request are made that introduce changes to the code. The second is the lack of End-to-End tests related to security features. Sometimes we have to test with mocked features / non-cascaded systems. Also it is possible that the test environment may differ from the production environment when it comes to more fine-grained configuration details and features.

Deployment: The schedule for security testing is often tight. As a result, it may not be possible to test all potential attack vectors, and it can be hard to decide which vulnerabilities to prioritize the testing and/or remediation of.

Maintenance: As time goes by, libraries get old and out-dated. Many modern threats to the supply chain also mean even up-to-date, well maintained libraries can be vulnerable to some nasty attacks.

In the next section, we will take a look at solutions we use at Mercari focused on the development and testing phases of the SDLC. Ultimately, there are two main pain points we are trying to solve here:

Since the issues at these two phases are inherent to manual testing, automated approaches to testing (e.g. performing automated code scanning to identify and alert on potential vulnerabilities in the source code) can help tackle these challenges. These solutions can also be relatively easily integrated into our collaboration space – GitHub.

To achieve this we tested many different tools and after much trial and error, we came to the conclusion that GitHub Advanced Security (a solution integrated into GitHub) provided more or less the perfect framework to solve the challenges we were facing.

We compared several commercial solutions as well as an in-house developed toolset against one another, and it turned out that GitHub Advanced Security had more advantages in terms of developer productivity improvements, ability to implement into different CI / CD pipelines, and ability to customize code scanning rules, etc. For more details about GitHub and GitHub Advanced Security, there is also a customer story page available on GitHub.

To understand exactly what the complex flows involved in this new process are doing, first let’s take a look at the original workflow we had in place and break down step by step how we added to and improved it:

Here is the original workflow we had for an engineer to add new features during the development stage. 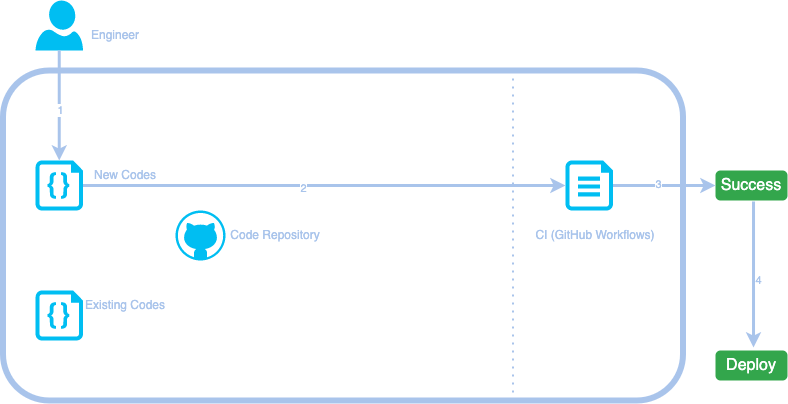 CodeQL is an analysis engine. It is used by developers to automate security checks, and by security researchers to perform variant analysis. Below is a diagram (refered from online resources) that explains the inner workings of CodeQL in more detail.

CodeQL treats code like data. In CodeQL, vulnerabilities / bugs / errors, etc. are modeled as queries that can be executed against databases extracted from code. When it comes to the functionality, CodeQL provides three main modules indicated by the orange boxes in the diagram above.

Why does CodeQL work well as a SAST (Static Application Security Testing) solution?

There are two great features offered by CodeQL – taint analysis and variant analysis.

Taint Analysis:
Taint analysis is based on the concept that any variable could potentially be modified by a malicious party. Using taint analysis requires the analyzer to first define the source and sink of a data flow. Whenever an input from a user is observed as the source, it is assumed that not only this source itself is already tainted, but all the variables along the way up until the sink as an output are also tainted.

To better understand taint analysis and variant analysis, let’s take a look at an example. For this exercise we will do a manual code review on the following pseudo code sample:

Warning: It is well known that to learn programming quickly one must get the hands dirty, but remember to sanitize the input when actually programming.

Warning: While our team would ideally like to put our feet up, enjoy a cup of coffee, and leave all the hard work of finding issues to our automated tool overlords, inevitably we still have to deal with the issue of false-positives. Reducing these and optimizing the scan results to provide reasonably accurate workable findings is not trivial work.

Why does CodeQL fit well with Mercari’s SDLC?

Here are the decisive benefits we see for using CodeQL in our environment:

CodeQL as part of the workflow

Here is what the workflow looks like with CodeQL integrated into the SDLC: What is Secret Scanning?

A microservice architecture means that each GitHub repository is responsible for one single, independent microservice. However, in most cases, a single microservice is not isolated and needs to communicate with other microservices, or even some external services. Sometimes, the tokens, private keys or credentials that are needed to make these communications possible are mistakenly hard-coded and pushed to repositories. This means that anyone who has read access to the repository is able to exfiltrate these secrets and potentially abuse them to access services they should not be allowed to.

It is recommended that secrets should be stored (sometimes even encrypted before storing) in a dedicated, secure location, which is not in the same place as the source code. Secret scanning allows us to identify secrets violating these best practices that have found their way into the code and warn about potential secrets before they get committed.

Partner Patterns:
Partner Patterns is used for public repositories. This scan will run automatically on all repositories under an organization. Any pattern that matches the list of supported secrets will be reported to the relevant partner. Once the secret is validated, GitHub will also notify the service provider who has issued the secret. If it is confirmed that a secret is included and probably leaked (e.g. due to supply chain attacks), the service provider will contact the organization for revoking/rotating secrets.

Advanced Security:
Advanced Security is for private repositories. Under GitHub Advanced Security, apart from the normal report provided, any pattern that matches the list of supported secrets will also be reported as alerts in the relevant GitHub repository under the Security tab and also in an overview dashboard for the organization. With these results, we can also enable CI checks to block pull requests that contain vulnerabilities at a certain risk level or higher. It is also possible to set up a similar config file like CodeQL to specify more rules, such as ignoring certain paths for secret scannings, or ignoring certain types of warnings that might be false-positives.

Another handy feature is “push protections”. Normally, secret scanning will run after a push is made to a list of predefined branches. However, in order to completely prevent secrets being pushed into the code, enabling push protections allows the code to be scanned in advance, preventing secrets from being pushed at all.

Secret Scanning as part of the workflow

Here is what the workflow looks like with CodeQL integrated into the SDLC. What is Sourcegraph and what does it do?

So far, it seems that the pain points during the development phase have been solved by integrating CodeQL scanning and secret scanning. However, there are still other problems we need to solve. What about when we have an org that is made up of hundreds or thousands of different repositories? Enabling all these new workflows one by one would be a truly insurmountable task.

That’s where Sourcegraph comes in handy. It is another great tool to polish off our code scanning solution.

Sourcegraph has many features. The main feature it offers is providing a search engine to facilitate better search capabilities for code. It supports almost all kinds of programming languages and provides many keywords to filter and locate certain code snippets.

When it comes to the aforementioned problem, instead of manually adding new workflows to make things easy and go back to putting our feet up with a cup of coffee, we can use bulk change tools to apply a pull request to each repository using a configuration file. Let’s take a closer look at another great feature by Sourcegraph which helps us achieve this – Batch Changes.

How do batch changes work?

Sourcegraph as part of the workflow

Here is the workflow with Sourcegraph integrated into the SDLC: Combining all these components above, here is a look at the final form of our workflow including GitHub Advanced Security: It is worth mentioning that old / vulnerable library inclusion is also a high-risk issue that must be addressed. The details are omitted in this blog, but in our SDLC we employ an SCA (Software Composition Analysis) solution called Mend (formerly WhiteSource), which regularly monitors for old / vulnerable libraries throughout the SDLC triggering based on its frequently updated vulnerability database information.

Tools and Workflows for an Improved SDLC

Improvement for the Future

While the above allows us to achieve a lot in automating security work throughout the SDLC, there is still much work and more to be done before we can truly enjoy that cup of coffee. Below are a few of the things we want to keep working on: