Hi there. I’m @sanposhiho, working in the Platform Infra team in Mercari, and also I’m a SIG-Scheduling reviewer in Kubernetes community.

I joined KubeCon + CloudNative North America 2022 as a speaker and gave a talk “SIG-Scheduling Deep Dive” along with other SIG-Scheduling maintainers. This blog post is going to summarize this session.

You can see the session video and the slide on the following links!

Note that at the time of writing this article, Kubernetes v1.25 is the latest and v1.26 isn’t released. I’m going to explain some features which will be introduced in v1.26 in this article, but the specification or release schedule may get changed.
Please refer to the actual documentation or CHANGELOG when you’d like to use those features.

Scheduler decides which Node a newly created Pod will run on. It checks several scheduling constraints, the current allocatable resource on each Node…etc and then decide the best Node for a Pod.
So, scheduler implements a lot of scheduling related features in it, such as NodeAffinity, PodAffinity, Pod Topology Spread…etc.

Scheduler is composed of a lot of plugins, and each plugin runs more than one extension point in the Scheduling Framework.

Here, I just introduced a high-level overview of the scheduler. If you want to learn more about it, then I’d recommend you watch the session Tutorial: Unleash the Full Potential Of Kubernetes Scheduler: Configuration, Extension And Operation In Production.

You can define which plugins you want to enable in your scheduler like this.

In the past, you needed to specify the plugin in all extension points that the plugin runs.
Actually, it’s kind of troublesome because the plugin may change the behavior and the extension points it runs on. You need to care about where the plugins run when they introduce a new plugin or update already-using plugins in your scheduler.

To deal with this problem, we introduced a new field called multiPoint in Kubernetes v1.23. When you specify a plugin in multiPoint, then that plugin gets enabled in all extension points that it can run on.

This feature will be introduced in v1.26 as an alpha feature.

.spec.schedulingGates represents if a Pod is ready for scheduling. If it’s empty, then the scheduler regards a Pod as scheduling ready and starts to schedule it.

It adds a new field minDomains to TopologySpreadConstraints. It literally means the minimum number of domains. It was introduced in v1.24 as an alpha feature, and then graduated as a beta feature in v1.25.

Before introducing minDomains, Pod Topology Spread only had the way to control the degree to which Pods may be unevenly distributed. (maxSkew field)

minDomains is useful for cases like when you want to force spreading Pods over a minimum number of domains and, if there aren’t enough domains already present, make the cluster-autoscaler provision them.

Note that it can be used only with DoNotSchedule.

Let’s see an example to understand it. Let’s say you have the deployment with 2 replicas, which has the following topologySpreadConstraints.

Here topologyKey is specified as kubernetes.io/hostname, so the Pod Topology Spread regards one Node as one domain.
In other words, topologySpreadConstraints says that “place Pods that match the labelSelector in two or more Nodes as evenly as possible.”

Then, what if when only one Node in the cluster? In this case, Pod cannot satisfy the minDomains constraint. Therefore, the first Pod gets successfully scheduled, but the next one gets unschedulable status.

Then, Cluster Autoscaler notices one Pod gets stacked in unschedulable status and creates a new Node to schedule it. Then, the second replica gets successfully scheduled. As a result, you can achieve Pods that spread over two Nodes as defined in topologySpreadConstraints.

Simply put, Pod Topology Spread checks if a Pod does not violate maxSkew when it is placed on this Node by this calculation.

I hope this example has helped you understand that minDomains is a strong friend when you want to spread pods across multiple domains through Pod Topology Spread and make them really resilient to failures.
In fact, since Mercari is built on a cluster on multiple zones, if we can enforce a situation where all microservices put pods in multiple zones by minDomains, it will make Mercari more resilient to zone failures.

It adds new fields nodeAffinityPolicy and nodeTaintPolicy. It’s now served as an alpha feature, and we plan to graduate it to beta in v1.26.

nodeAffinityPolicy and nodeTaintPolicy are the options to specify whether to take nodeAffinity and taints/tolerations into consideration when Pod Topology Spread calculates the skew.

The problem behind it was that it always didn’t take Node taints into consideration and it sometimes resulted in unexpected behavior. Let’s see an example.
Let’s say you have topologySpreadConstraints like the following, and one Node has a untolerated taints. The scheduler takes both Nodes into consideration, but it doesn’t care about the taints.
In this case, the first Pod can go to Node1. However, the second one will be Pending since Node2 has the taint regardless of the Pod Topology Spread wanting to schedule it on Node2.
By setting Honor to nodeTaintsPolicy, the scheduler ignores tainted Nodes and we can avoid the problem. 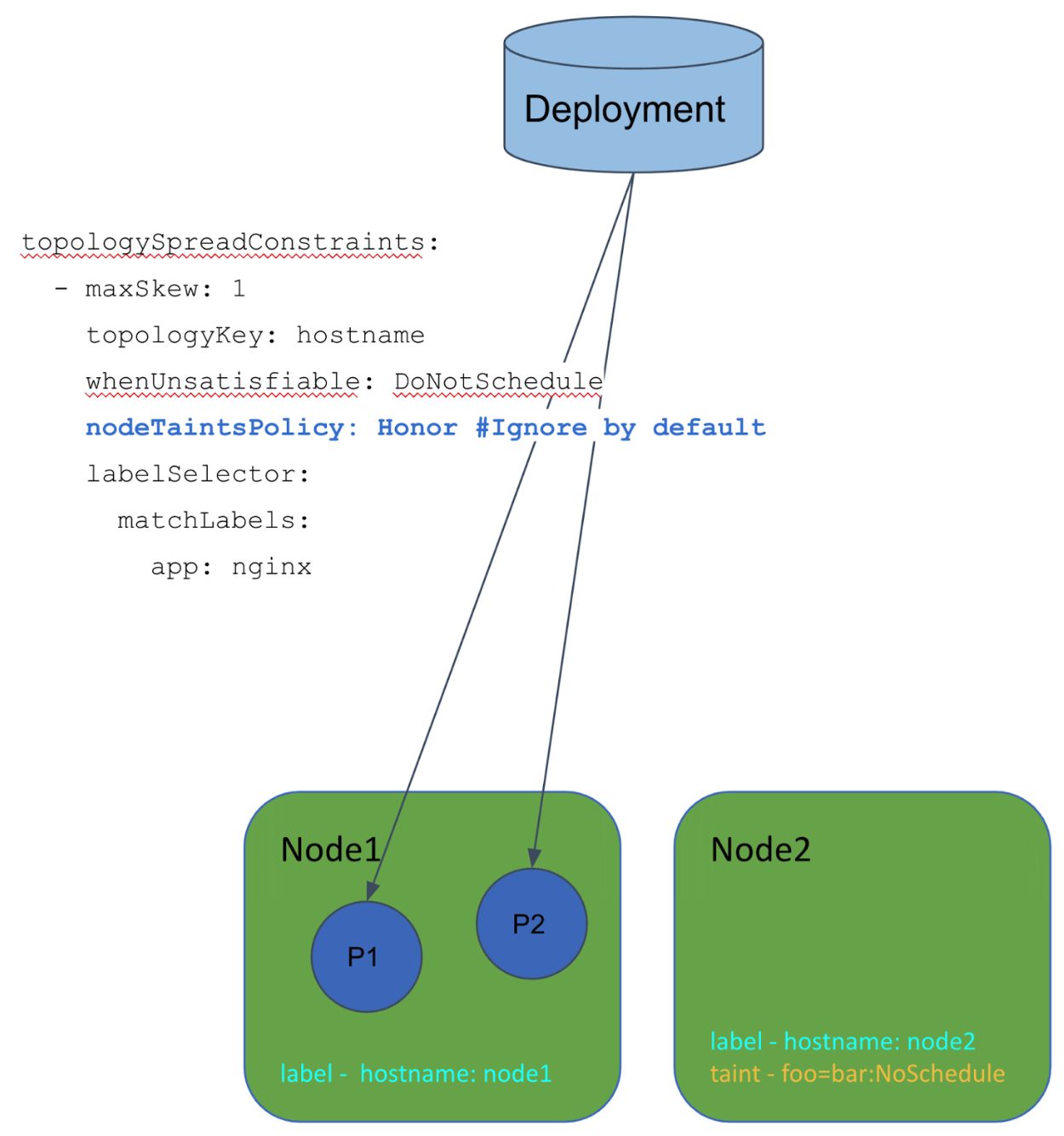 matchLabelKeys will solve this issue. The topology spread constraint uses those keys to look up label values from the incoming pod; and those key-value labels are ANDed with labelSelector to identify the group of existing pods over which the spreading skew will be calculated.

Above are the feature changes listed in KEP, but there are a few more interesting updates related to the Scheduler so I’ll share them from here.

This Pull Request contains two changes.
The first one; it changes PreFilter plugins to return PreFilterResult. PreFilterResult contains the set of nodes that should be considered downstream extension points. It contributes to reducing wasted calculations in the downstream plugins.

This patch was introduced in other versions as well, and we refactored the scheduler’s internal structure to prevent such a problem from happening in the future.

This PR changes the interval of flushing from 60s to 5m and we hope we can remove the flushing completely in the future.

As I said, Scheduler has a component config KubeSchedulerConfiguration and it reached v1.

The legacy scheduler policy config is removed in v1.23

The legacy scheduler policy config is removed completely, and you should move to KubeSchedulerConfiguration if you’re still using it.

From here, I would introduce sub projects from SIG/Scheduling.

The first one is kube-scheduler-simulator.

Nowadays, the scheduler is configurable/extendable in multiple ways. But checking the scheduling decision in detail is kind of hard. Checking each plugin’s decision requires increasing the log level, and it also requires strong permission on your cluster.

The simulator helps you check/evaluate the scheduler’s behavior easily, which doesn’t even require you to prepare the Kubernetes cluster and you only need to run the simulator binary. (+ simulator-web client if you’d like to use it)

It’s still a young project, and it hasn’t even reached its first release.

It has own kube-apiserver in it, and you can do anything by communicating with it like in a real cluster.
Then, when you create Pods in the simulator, the details of a scheduling result, such as scores and filtering results, will be added to Pod’s annotation like magic.

The simulator also has a web client and you can check the results easily like this. (You don’t necessarily need to use Web UI because Pod annotation has all scheduling results displayed in the Web UI.) Now, we are developing to reach its first release (v0.1.0) and also, we’re discussing a new feature scenario-based simulation.

It has these core features:

You can see its concepts and APIs here.
https://github.com/kubernetes-sigs/kueue/tree/main/docs/concepts

Also, the community published a blog post to introduce Kueue, which you can also refer to know more about it.
https://kubernetes.io/blog/2022/10/04/introducing-kueue/

Scheduler only checks the cluster’s situation and decides the best Node for Pods at that time. But, Kubernetes cluster changes from moment to moment.

Then, here is Descheduler; it checks the latest cluster’s state, and evicts Pods running in
non-appropriate Nodes. It expects that replicaset or something creates Pods again and Scheduler schedules those Pods on the best Nodes.

You can configure which Pods are eligible for descheduling by DeschedulerPolicy.

That’s it about the overview of Descheduler. Let’s see the latest updates from here.

It’s a big internal architecture change that proposed changing each policy to a plugin like Scheduling Framework and make Descheduler pluggable and easy to expand.

This is a quite new project. It can create fake Nodes and fake Pods behaving like real Nodes and Pods.
Its strength is that you don’t need to start real Nodes or Pods to check the behaviors of Scheduler, Cluster Autoscaler, or any controllers.

Some Scheduler’s plugins like NodeAffinity, PodAffinity, etc exist by default inside the scheduler.
However you can also implement your own scheduler plugins to satisfy your own use cases.

The scheduler-plugins repository contains plugins that are maintained by the community, but are not integrated into the upstream scheduler by default.

If you find a feature you want but does not exist in the scheduler, take a look in this repository and you may find something that fits your requirements, or you may find an idea that will help you solve your problem.

This completes all the explanations of what was presented during the session. From here, I would like to give a light summary, including a few personal thoughts.

Among other changes, I personally see great potential in the PreEnqueue plugin extension point introduced with SchedulingGates. Until now, it has not been possible for plugins to control the behavior of Scheduling Queues in detail, so I expect the PreEnqueue plugin extension points makes it possible to improve scheduler performance by adding some plugins specific logic.

Among the Sub Projects, Kueue is probably the most interesting one for me at the moment.
There have been several projects to use Kubernetes in clusters for batch jobs, such as machine learning, and it is interesting to see how Scheduler can be extended to schedule batch jobs efficiently.
To try to support such batch workloads as a Kubernetes community, [wg-batch](https://github.com/kubernetes/community/blob/62b16d1aafdd744708c2f5243f 90e858806bff95/wg-batch/README.md) was born and Kueue is being developed by them.
Currently, v0.2.X is the latest at the time of writing, and although it is still a young project, I look forward to future developments, how the project goes, and the future brought by them!

It’s honored to receive the Kubernetes contributor award from the community. It’s a pleasure to work with the SIG-Scheduling members and I greatly appreciate all help from everyone 🙂

Wow, I got Kubernetes contributor award this year!
I'm beyond honored to receive it! Thanks #KubeCon pic.twitter.com/L8ikZU58SQ