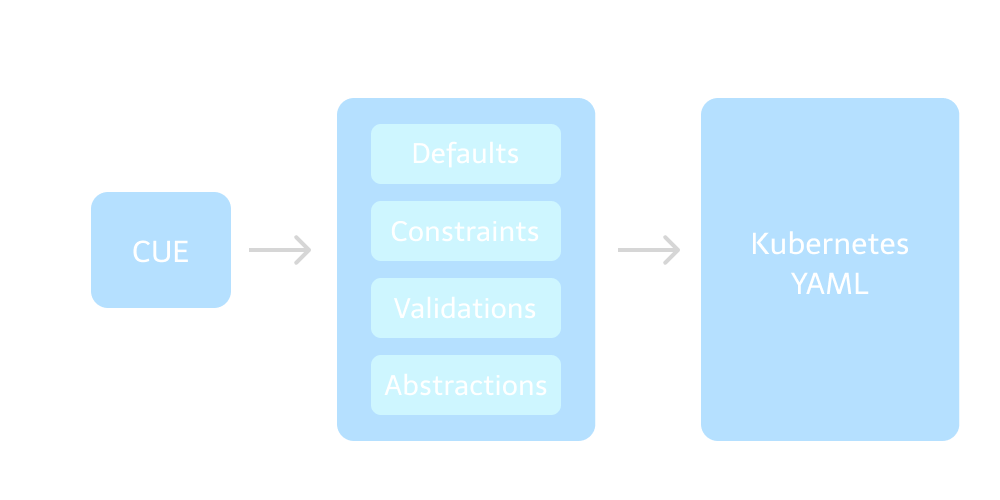 This article is a part of Developer Productivity Engineering Camp blog series, brought to you by Hideto Miki (@micnncim) from the Platform DX Team

This article introduces a CUE-based abstraction of Kubernetes manifests we’ve been developing.

It was created to solve many issues with configuring Kubernetes manifests. It reduces the amount of code, ensures resources are valid, defaults recommended configurations. Projects have up to 90% less code after migration.

The project’s name is Kubernetes Kit (k8s-kit). It aims at simplifying Kubernetes manifests, reducing the amount of code, and easing cognitive load and required knowledge of Kubernetes and associated technologies like Istio for up and running services on Kubernetes clusters. The kit is implemented by CUE with the alternative to YAML.

A relevant project, Observability Kit, is also implemented by CUE to describe observability things like dashboards and monitors. Check out the article for more details.

We have been using Kustomize and raw YAML to configure Kubernetes resources
In a nutshell, we had the following big challenges as more and more applications, typically microservices, have been developed and deployed:

Since we’re running 200+ microservices in a production cluster and all devs aren’t Kubernetes experts necessarily, it was difficult to make sure all configurations are valid. It even can lead to lots of copy-pasting with some invalid configurations. Also, we, as a platform team, want to control Kubernetes resource configurations and sometimes need to update all of them with our requirements/recommendations. A typical example is a case where a platform team wants to ask devs to enable a new feature in the existing services. An example is Workload Identity. This secures applications running on a Kubernetes cluster and connecting to Google Cloud and we need to make sure that it’s enabled in all applications. This needs a bunch of updates for lots of manifests but it was difficult to do it without asking each developer or doing it by ourselves one by one. The kit also abstracts Workload Identity, which helps devs to migrate to it and even can default it. The kit solves such issues without increasing the burden of devs and allows advanced users are able to compose configurations in more clever and expressive ways than before.

The kit provides varying levels of abstraction on top of Kubernetes resources. All of which have reasonable defaults to meet requirements for up and running an application on a Kubernetes cluster. A notable example, the Application abstraction generates a set of Deployment, Service, (Horizontal|Vertical)PodAutoscaler, and PodDiruptionBudget resources; as well as a DestinationRule and VirtualService if Istio has chosen to be adopted.

The common issue with such an abstraction approach is that it can’t provide flexibility. However, the kit still has big flexibility so users can adjust their configurations based on their needs. It provides a patching mechanism to enable us to add, update, and delete arbitrary fields.

It also validates many fields by the feature of CUE, which prevents users from misconfiguring their Kubernetes resources. We offer constrained definitions of Kubernetes resource definitions for those who need to. For example, it disallows HorizontalPodAutoscaler (HPA) to have a value of minReplicas larger than its maxReplicas. This is a very simple example so you might not think it’d be really necessary. However, it provides more straightforward validations than some other methods like OPA and still realizes flexible validations like using regular expression and referencing configurations for multiple kinds of resources. This lets devs avoid lots of pitfalls in the Kubernetes configuration. The details of them are described in the below section.

CUE is an open-source language used to define, generate, and validate all kinds of data. It’s a superset of JSON and provides integrations with many other language standards like Go, JSON, OpenAPI, Protocol Buffers, and YAML.

CUE also provides scripting features with just CUE and Go API, which we make use of to implement commands to see outputs as YAML, deliver resources, and so on.

Before going to the detail of the k8s-kit, you need to understand the following key concepts of CUE:

CUE defines configuration like the following example. This is a slightly modified version of an example the official documentation provides.

What does CUE do here? First, #Spec, which is called a definition in CUE, defines a scheme of data. This requires the kind and name to be configured, defines constraints for some values, and sets the default value for minimum.

spec is configured as conjunction with #Spec. Notice the shorthands in spec.name. A field whose value is a struct with a single field may be written as a colon-separated sequence of the field names.

CUE identifies a definition if it’s prefixed with # and identifies a value if not. Definitions don’t export, unlike values. Fields suffixed with ? are regarded as optional and CUE throws an error if non-optional fields aren’t given. If spec.kind isn’t given, CUE tells you it’s required but missing:

We can look at the output of the data by the following command:

You can see that the #Spec definition doesn’t appear and the value of minimum has defaulted.

The package identifier defines a package of the file, which allows a single configuration to be split across multiple files. The following two files are interpreted as the equivalent to the first example in this section:

CUE also has an import feature to import other packages, either standard packages like the “strings” package or user-created packages.

Generally, Kubernetes manifests require many boilerplate-like configurations in any kind of services, and some configuration to run services securely and efficiently like a security context and Horizontal Pod Autoscaler (HPA).

CUE provides mechanisms for intelligently setting defaults and validating values. It works well to simplify Kubernetes manifests. For example, CUE can generate an HPA manifest with reasonable values of minReplicas and maxReplicas while keeping flexibility. It can also append the label required for injecting an Istio sidecar based on a provided configuration.

With CUE, everything can be done in a local environment rather than relying on some external systems. Validation and generation can all be done on the client-side. Many alternatives would do this on the server side which limits the interactivity and stretches feedback loops.

These attributes let us satisfy all of our use cases; simple and advanced configurations, and even how resources are deployed. CUE is much more expressive than Kustomize and Helm with keeping central packages maintainable.

As previously mentioned, k8s-kit is implemented by CUE and provides devs with the interface of configurations with CUE.

An example of the simplest configurations looks like the following:

Application generates multiple Kubernetes resources as described above. And this simple configuration generates 200+ lines of YAML at the time of writing.

The following describes what each field and expression means, in order of appearance:

This heavily depends on other definitions that we are omitting here, so you don’t need to completely understand what each field means. #Application and its dependent definitions sets defaults and validate values, allowing users to focus on specifying only the necessary parameters based on their requirements.

The kit is originally designed to support multi-cluster configurations, unlike some other tools. The cluster to which an application is to be deployed is defined within the Metadata:

Note that the above is expressed by a CUE’s shorthand. In the example, specifying ”tokyo” means Kubernetes resources are deployed to the “tokyo” cluster.

Since all files belonging to the same package end up being interpreted as the concatenation of the files, there is no restriction on a directory structure or the need to specify dependent files/directories like Kustomize.

We recommend the following structure to avoid duplications as much as possible but each dev can choose their own structure:

You may see configurations under child directories unify with ones under parent directories.

Now that we covered the basics of the kit, let’s take more examples to know more how valuable it is.

Example below shows how to customize a configuration specific to a service:

The example specifies a port number for Deployment and Service, overrides the default configuration for HPA, and patched an annotation. The kit is designed to allow devs to easily customize their configuration and change most of the values flexibly as above.

This example demonstrates how we can add additional resources:

The kit can populate field values by referencing fields of other objects, which lets us avoid duplications.

The following example demonstrates how an Istio-related configuration can be done:

This one line configuration in CUE allows the kit to generate the sidecar.istio.io/inject: "true" label, a bunch of Istio annotations with reasonable defaults, and configurations for some kinds of resource like DestinationRule and VirtualService. An Istio-related configuration is required for organizing a service mesh but is one of the most difficult to understand and configure correctly. The kit allows devs to easily set it up properly without much knowledge of Istio.

The scripting feature with CUE enables the kit to work well. Our custom commands retrieve configurations written in CUE and run their jobs with the data.

Basically, the commands that are provided by the kit take the output of Delivery and decide what to do based on the data. For instance, the dump command prints manifests in the form of YAML (and even JSON):

A simplified implementation of the command looks like the following:

This passes Delivery to (json|yaml).MarshalStream and it prints a given values in the form of (JSON|YAML).

While this worked well in most cases, this has performance issues in a few edge cases and is hard to distribute to multiple repositories as a package. Therefore, we’re migrating the CUE scripting to use the Go API for CUE using flow package. Since its details are beyond the scope of this article, we will not describe how it works. Please check out the official document if you’re interested.

The project allows devs to develop their applications faster and more confidently. The project is still in the early stage but we’re sure the project is going well and we can publish the information on this project more in the future.

Here are several resources to learn more about CUE. Please check them out if you got interested in CUE.

The Platform DX team has been constantly enhancing developer experience with platform engineering. If you’re interested in working with us, please don’t hesitate to apply for the jobs!