The Four-Year history to migrate Mercari Web to Microservices

*This article is a translation of the Japanese article published on August 30th, 2022.

On August 4, 2022, a server called "web-2" was shut down at Mercari. This was the end of an era for those teams involved in developing Mercari Web.
The web-2 server was a web server written in PHP, and it had been serving content under https://www.mercari.com/jp/ since 2015. Several web microservices are now responsible for its functionality, and pages under https://www.mercari.com/jp/ are redirected to pages served by these.

The process of migrating Mercari Web to microservices and finally shutting down web-2 actually took over four years to accomplish. In this article, we are going to cover what the development teams discussed over these four years, describe our architectural design choices, and consider what kind of organization and architecture can best handle change. I hope you’ll find some useful information here!

Launch of the Web Re-Architecture project (from May 2018)

We launched the project to overhaul the architecture of Mercari Web in 2018.
All Mercari Web content was served from the web-2 server at that time. Back when web-2 development first began, there were a lot of team members with plenty of experience in PHP, and we were using an internally supported PHP framework called Dietcube (https://github.com/mercari/dietcube) to write an efficient server-side implementation. However, we began to notice some issues as time went on.

Mercari Web: May 2018
(We were also using CDNs, proxy servers, and databases, but I’ve omitted them here)

In order to solve these issues, we launched the Web Re-Architecture project in May 2018. Our goals were to overhaul the codebase and architecture to make Mercari Web easier to maintain, and to use the latest web frontend technologies to increase page rendering performance.

This is how we began considering which technologies to use and which microservices to provide. The microservices created during the Re-Architecture project are listed below, along with brief descriptions of how they came to be.

Our Web Re-Architecture plan was presented during the 2018 Mercari Tech Conference. You can also see information on re-architecture goals and architecture from this presentation.
https://speakerdeck.com/mercari/mtc2018-web-application-as-a-microservice

Release of web microservices (from June 2019)

Our first goal was to serve just the front page from the new architecture as soon as possible. However, we ran into several problems and fell behind our release schedule.

The first release finally became possible in June 2019, or roughly one year since development began. We first released web-gateway. Although it merely proxied requests to web-2 at this time, we decided to release it first so that we could control routing destinations as we released other web microservices.

In order to release other services, we used the canary release functionality of web-gateway to gradually switch front page traffic from web-2 to web-fuji from 0% (access allowed only to internal users) to 1%, 5%, 10%, and so on, and finally were able to switch 100% of requests to web-fuji in August.

I posted an article in the past (Japanese only) that provides more details on how web-fuji and web-graphql were released after the architecture change and describes web-gateway functionality, so feel free to check it out if you’re interested in learning more.

After releasing the front page, we began gradually switching other pages to web-fuji. There were some concerns that web-fuji and web-graphql would themselves become new monoliths, so we began considering how to decouple services.
While all of this was happening, we arrived at a turning point in December 2019.

Launch of the GroundUp Web project (from December 2019)

There were several reasons for the launch of the GroundUp Web project.

Of course, we also considered taking an approach that would have resolved this issue using the existing Web Re-Architecture project architecture. However, we wanted to design architecture without being restricted by existing architecture.

Some of the decisions made for the GroundUp Web project architecture are described below.

Use web components to overhaul the Design System

When we were considering web microservice responsibilities, we decided not to split off microservices unless there was a clear reason for doing so. A browser downloads JavaScript or other files required for the web page to function. If content is distributed from different microservices for different URLs, changing a service will also change these required files, which will reduce cache efficiency. Splitting services up too much can therefore have a negative effect on the user experience. This is why we decided to allow web-suruga microservice to have many responsibilities, and splitting services up only when required.

To develop new microservices we looked back on our development experiences during the Web Re-Architecture project, and decided to provide a BFF for development that can easily call APIs until session management and API calling could be properly implemented. This made it easier to build the frontend. We were also able to take what we learned during the Web Re-Architecture project and apply it toward tasks such as configuring CI/CD, implementing end-to-end testing, and building an infrastructure on Kubernetes.

We continued to add functionality to web-2 and web-fuji in parallel for a while, but ended up halting this and instead worked with all of the Mercari Web development teams on implementing the GroundUp Web project.

We were finally prepared for release after a development period of around one year. We had been using URLs under https://www.mercari.com/jp/ for Mercari Web, but were also using https://www.mercari.com for Mercari US. We wanted to maintain separate Japan and US sites, and so we decided to switch to the https://jp.mercari.com domain after releasing GroundUp Web.
We came up with the following plan for launching gradual releases.

We were able to launch the Limited Release in March 2021, but had to temporarily stop development in order to join a companywide response to a security incident in which an attacker gained unauthorized access to Codecov (https://about.mercari.com/press/news/articles/20210521_incident_report/ (Japanese only)).
Once we were able to resume development, we began designing and implementing redirection for the Limited Release and Full Release. Until this point, web-2 and web-fuji were processing requests for each path under https://www.mercari.com/jp/, so we implemented redirection on both web-2 and web-fuji.
Once this was finished, we launched the Limited Release without issue on August 5, gradually increased the redirect ratio, and then launched the Full Release on September 29. In this article, I’ve focused mainly on the roles of each web microservice. If you’d like to learn more about the web-suruga microservice, which played a central role in the GroundUp Web project, details on the architecture and development organization can be found in the following article: https://engineering.mercari.com/en/blog/entry/20210810-the-new-mercari-web/

Although we didn’t have any issues launching the Full Release of GroundUp Web, not all of the pages under https://www.mercari.com/jp/ were being redirected to https://jp.mercari.com, as there were still some pages being served by web-2. The services created during the Web Re-Architecture project (web-fuji, web-graphql, and web-session) were also still running to provide redirection. Our next goal was to completely eliminate the service infrastructure for web-2, web-fuji, web-graphql, and web-session, because we would otherwise have to continue to maintain them and implement security measures, even if most of their functionality wasn’t being used. We called this the web-2 Sunset project.

We started working on eliminating the services that were just providing redirection (web-fuji, web-graphql, and web-session). Although redirection itself is required, there was no need to maintain an infrastructure for these services. We had provided redirection with keeping login status of users who had already logged in the old domain for one month after the release of GroundUp Web, and it required complex functionality to refer cookies and issue access tokens but we could eliminate this functionality. So it would be sufficient just to map URLs under https://www.mercari.com/jp/ to URLs under https://jp.mercari.com.
In November 2021, we provided a microservice called web-redirection (used only for redirection), and were able to remove the infrastructure for web-fuji, web-graphql, and web-session.
We implemented web-redirection using Cloud Functions, because we wanted to reduce the amount of work to maintain the service, and because we wanted to provide the implementation with some flexibility. 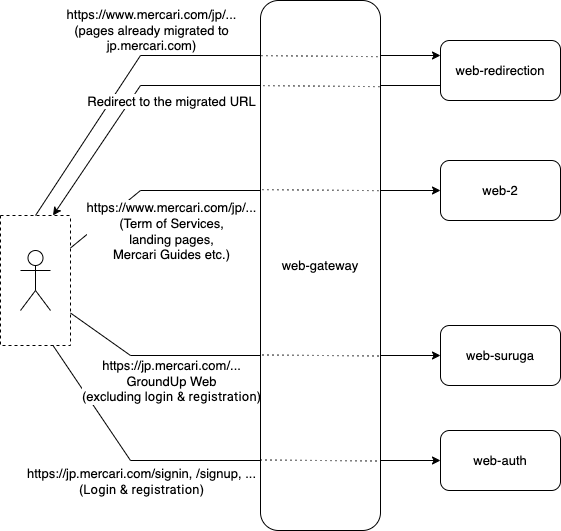 Mercari Web: November 2021
Redirection provided by the web-redirection service, allowing the web-fuji and web-graphql services to be eliminated

Of these, web-2 provided CMS functionality for Mercari Guide and Mercari Guide is independent from Mercari Web app, so there was already a plan in place to launch a new help-center microservice and migrate the existing pages.
As for the other pages including terms of services and privacy policies, and landing pages for promotions, there was no need to call APIs, and so these pages could be provided using static files such as HTML. We decided to create a new microservice called web-static-page and migrate these pages to it.
That leaves us with the pages that launch the Android App or iOS App through universal links. These functionality can be provided by redirection, so we decided to implement them on the web-redirection service.
Using a common domain between multiple microservices causes some potential issues, such as Local Storage or cookie information being shared unintentionally. We therefore decided to serve content on different domains if the microservice is different.

The teams with ownership of these services worked on these development projects in parallel, and were able to migrate their pages on the following schedule.

As of June 2022, all requests under https://www.mercari.com/jp/ were being redirected, and there was no longer any traffic to web-2. The infrastructure for web-2 had been completely eliminated as of August 4. Finally, after more than four years of work, our conversion of Mercari Web into microservices was complete. Our architecture has continued to change to support the needs from application and organization, and to suit whatever technology we can use. The microservices we’ve developed over the last four years will also continue to be changed.
As of the writing of this article, the Web Team is planning to make the following architecture changes.

As for the first change, we actually had some concerns over performance when initially designing the architecture, and had conducted a load test prior to deciding to use dynamic rendering. However, the application itself hadn’t been completed when we conducted the load test, and so we instead performed rendering using test content. Our results ended up being quite different from those of the final application. We first realized that the load would be a problem immediately prior to release, but it wouldn’t have been possible to migrate to SSR at that point. We decided to investigate the issue later, since this dynamic rendering feature wouldn’t have any impact on users.
On the other hand, this change wouldn’t impact any other microservices, since web-suruga was the only microservice using dynamic rendering. I guess this shows the benefits of a microservices architecture!

When I reflect back on these four years of architecture changes and development work, I see a lot of areas we were able to improve. This isn’t meant to place any blame or criticize any work! Instead, it’s better to look back on the purposes, development processes, and results of changes we made, and reflect what we’ve learned for future changes. I think that’s how you build a stronger organization. I hope this article will be of some help for it.

Finally, I’d like to thank everyone who contributed to the web-2, and also everyone involved in the Web Re-Architecture project, GroundUp Web project, and web-2 Sunset project. I really appreciate all of your work building the basis for Mercari Web and your efforts during each project to make Mercari Web what it is today. Thank you very much!

If you are interested in joining the projects like these at Mercari, please take a look at our career page.