Hello! My name is @kentan, and I work as an Engineering Manager here at Mercari.

Our company’s Customer Reliability Engineering Team has developed what we call the Moderation System, which uses mechanisms like machine learning and rules to detect listings that violate Mercari’s rules. The Moderation System is systematically connected to the Mercari marketplace and has the traits of providing a web-based UI designed for use by Mercari Customer Support in their work cracking down on illegal activity. The system includes elements of frontend, backend, and machine learning technology and has features whose sophistication continues to grow.

Historically, at Mercari the backend, frontend, and machine learning engineering teams have worked separately according to their team and job function. This is why, when we started development on the Moderation System, we had to work together on development as a project team composed of several teams and comprising multiple job functions. 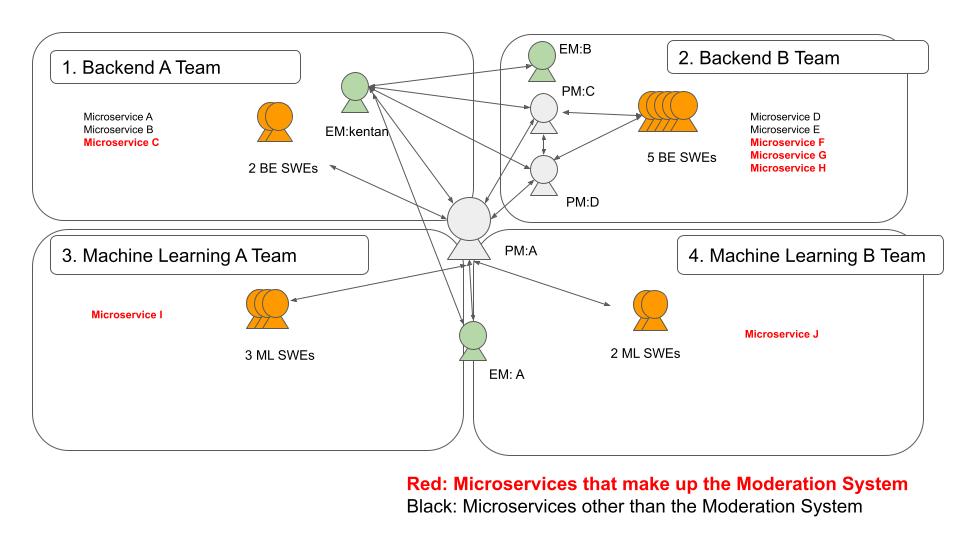 From the time we first broke ground on the project, we easily imagined the difficulties of getting four teams to communicate. This is why, in order to keep the members participating in the project on the same page, we created cross-team milestones, and we laid out the format for communication between teams. This worked very effectively, but as one would expect, we could not ignore the problems involved in developing a feature of this size relative to the large number of teams involved. In addition, due to things like some members leaving the company, one of the teams also faced a shortage of engineers and had to restructure their team.

What’s more, as other members were either transferred to different teams or resigned from Mercari, the product owner roles for three teams were consolidated in the hands of a single product manager (PdM). It became necessary to reduce their workload because this one PdM was taking part in the scrum events of three teams.

Team structure and ownership of microservices

To solve the problems we encountered, we considered restructuring the teams, and at the same time considered keeping the same team structure and re-examining who held ownership of microservices. This is because we expected that, even if we kept the existing structure of the four teams, we would be able to solve or at least reduce our problems by keeping the development of microservices for Moderation Systems to two or three teams.

Through our discussions, we concluded that we should first look at restructuring our teams rather than transferring ownership. There were two reasons for this:

Therefore, we decided not to touch the ownership of microservices and instead looked at restructuring our teams.

In restructuring our teams, we first got to work on the areas that we thought would benefit the most from being shuffled. As a result, we ended up merging the Backend A and Machine Learning A teams. Generally speaking, we chose to merge these two teams for the following reasons:

How we merged the teams

Phase 0: Checking the motivation of our members

We explained to each team member the purpose behind merging the teams. Then, when we asked them about their intentions, every last member said they could handle the challenges of taking on a new field. You could tell that they were driven. For the machine learning engineers, this would allow them to expand their expertise into the field of backend engineering, and backend engineers could also expand their expertise to include machine learning.

We merged the teams in four stages.

As the Engineering Manager of Backend A Team, I was put in charge of the merged team as the EM. Personally, my experience was exclusively as a full-stack engineer working mainly on backend engineering, and I had absolutely no job experience working on machine learning. I didn’t have any domain knowledge regarding the development that Machine Learning A Team worked on either. For these reasons, acquiring this knowledge was a top priority.

Next, team members of each team learned domain knowledge.

After each and every member had acquired domain knowledge, the groups unified their scrum processes. The teams had brought together their sprint refinement and planning, and so the merged team operated like a single development team.

Last but not least, we adopted a single on-call system for the entire team. What this meant for our members is that they were on call half as often, which drastically reduced their workload. What’s more, allowances associated with on-call duties were cut in half. For the company, this led to improved cost efficiency on development.

We have started frontend development as the newly formed Feature Team. Customer support work involves a very complex group of features, and the UI is also within the purview of these duties. The percentage of frontend work that comprises Moderation System development work is substantial, and when we examined this work next to the Feature Team’s concept of executing all of the necessary development within their team, we saw a goal that we wanted them to achieve.

What’s more, for us to work on full-scale frontend development, we naturally must have frontend engineers with robust skills. To this end, we are hiring. Interested? If the answer is yes, be sure to contact me.

It’s of course no easy task to merge two teams into one when the members’ skills differ as much as the skills of backend engineers and machine learning engineers. I think one reason stood out above all other as to why it was possible for us to succeed at merging teams under these circumstances and without any issues: Our team members worked proactively to merge the teams. With regard to the unifying of on-call duties in Phase 4, all steps, from concrete planning to implementation, were centered on the Tech Lead and were completed with me having almost no involvement in the process as the EM.

Although generally classed as being out of the norm, I think that having an EM fill the role of scrum master was effective. To put it bluntly, when it comes to things where almost any format will work, like day-to-day standup meetings and the writing of tickets, having the EM make decisions about these things skips over a lot of fuss. For the time being, I make a decision, we put it to work, and then continue with scrum development.

In the process, for anything that is no longer a good fit, we discuss making improvements at the sprint retrospective as topics surface.